To say it has been a while since I posted would be a huge understatement. Now, for some reason, I feel the want and desire to start putting a few sentences and paragraphs together for all the World to see.  Although I know not many will see these ramblings for reasons that are obvious.

Prep for xterra nationals is in full swing as there are only 27 training days left till the cannon fires at Pineview Resevoir. To be honest, I'm not feeling great at the moment. However, there are 27 more training opportunities to get me where I'd like to be. I had a great weekend of training which consisted of a bike, brick and swim. I feel confident I will get to the race in the best form I have ever been. I will finish. It's gonna hurt though!

That's not really the name of the event, but I have issues with purposely mispelled words.  So, I am renaming this event.  Results can be found here.


This is the second year I have raced here so the course was familiar.  However,  the bike course was changed.  It was two 5.5 mile loops with a two mile section of road to start and finish.  Coming off a solid race at Eureka Springs I had high hope for this race, really wanted my first podium finish.

Fancy digs right on the lake and 10 minutes from the race start. 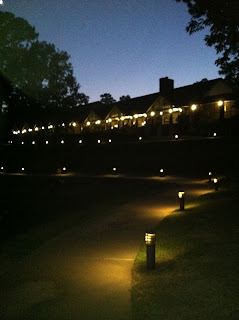 There were actually two triathlons going at the same time, a sprint road tri and the Xterra.  Unfortunetly,  the Xterra swim started as wave three of the day so I had to swim through 20-30 swimmers.  I was good training for me and I can definetly say that I have made great improvements with my open water swimming.  Out of the water in 16:47 for the 880yds, 1st in my AG.

This time I had my nutrition taped to my top tube(last race I forgot my gels at T1).  Overall I am pleased with my bike.  I had a bit of a drop mid way through the first lap, but I found my legs for the second lap.  15 miles in 1:28. 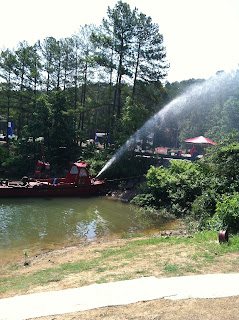 Overall, I missed the podium for my AG by less than 7 minutes and first by 12.  Loved the course and i am going back in October for the Epic. 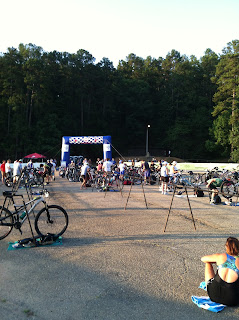 This is a quick,short race report for Xterra Euereka Springs.

First I should start with a little history of me and my race here last year.  It wasn't a good race for me, I got beat up on the swim, had a slower than expected bike and cramped on the run.  This race kicked my ass last year.  So, understandably, I was a little nervous going into this race.

I got great advice from my coach the day before, he told me to remember that I have done the work leading up to the race and to smile and enjoy the day.

Really, I had a great swim.  Way different from last year.  I was able to pick my starting spot, get to the right of the main group and swim at my pace.  Finished the swim about 20th  15:30 for the 880yds.  Most importantly, I wasn't fatigued coming out of the water like last year.  Big plus!

The bike course is 13 miles in length, it is a rough 13 miles.  Three big climbs and many technical sections make this course one of the toughest on the Xterra circuit.  That being said, I went out cautious.  I was riding the course very well, cleaned all the major climbs and only had to walk one technical section on the backside of the lake.  The only major mistake I made was forgetting my nutrition at T1.  I rode strong up to about 1hr40 min, I think I found my limit.  I have to take on some kind of calories before this point.  Finished the bike 1:30.

It's really sad that I had no fuel on my bike because I really think I could have put together a great race.  I came out of T2 surging, I wasn't going to let this race beat me again.  However, half way through the first climb of the run I knew it wasn't going to be my day.  My time was faster than last year but not what I was hoping for.  Time 1:12

Overall I am really stoked about my race.  I beat last years time by 35 minutes.  I was properly fueled to start the race, but I failed to put enough calories in my body during the race.  Lesson learned, on to the next race.
Posted by igotem ____________ Kevin Cox at 4:40 PM No comments:

Just a week away!  I have ridden the course a couple of times in the past week.  This is the Dryest I have ever seen this trail this early in the year.  Should be some fast times next Saturday. 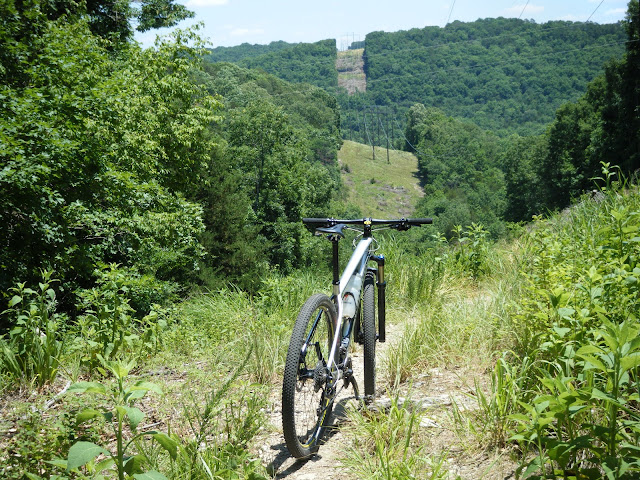 Going To Be a Good Year

One might ask, Why make the assumption that this year will be "good?" To be honest, I really don't know. However, I am extremely optimistic about the upcoming year. The main reasons I think this year will be fruitful are the fact that I am being coached by Trevor Glavin, it's my second year with him, I'm over my freshman year of Xterra, and many of my races this year are on course I raced last year.

First is Trevor, TG. I asked him to be my coach a few years ago, but due to injuries, last year was the first he actually got to coach me for a full season. TG really knows what he is doing as a coach and I am really stoked to see what he has planned for me each week. I am sure I will see much improvement this year having been under his guidance now for the second year in a row.

The other reasons I say this year will rock is that I have gotten over my freshman year of XTERRA. Racing all three disciplines off road is not easy, it took me most of last year to realize what I had to give on each phase of the race. Also, the races I have planned for this year are ones I did last year, knowing the course is invaluable to me.

There it is, just a few reasons why I will kick ass this year. If I don't, then there is always next year.

I'll close with a few pics from today's run at Hobb's. BTW, nailed that 55 minute run. Yeah, it's going to be a good year! 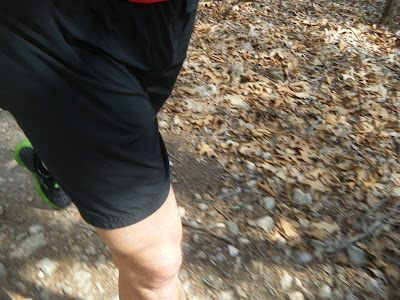 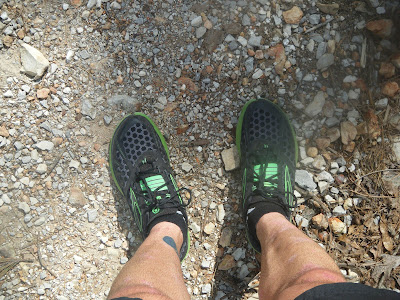 I really like this pic, not only does my hair look fantastic but in the background the trail is visible. Sweet Singletrack. 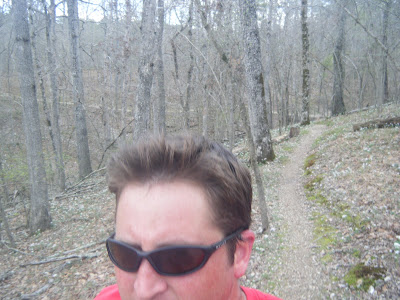 This past month hasn't gone exactly as I had planned training wise, but the past two weeks I have been able to put in some decent training. The highlight was this past Saturday and Sunday. Weather this previous weekend was superb, almost Spring like with temps in the middle 60's. Saturday was an off-road ride at Slaughter Pen utilizing only Phase 1 trails, the two other sets of trails just don't drain as well as Phase 1. So, I did multiple laps on a 4 mile loop. The weather was perfect and this was the first ride in a long time that I wasn't totally sucking wind.
Sunday's weather was even nicer than Saturday and I so wanted to get back on the bike, but I thought that my legs couldn't take another beating. Also, I wanted to remember how good my legs felt on Saturday's ride and not have a complete meltdown the very next day. So, I decided to take Smuckers on a trail run instead. I've been reading some other athlete's blogs brag about how warm their Winter has been in Southern Cal so I am going to join in as well. I ran Yesterday, Jan. 15th. in shorts and a T-shirt. This Winter has been so mild and I am loving it. I am counting down the days till March.
T-minus 49 days till my first race of 2012!
Posted by igotem ____________ Kevin Cox at 4:37 PM No comments:

No Training equals No Posts.
That pretty much sums up my last two months, no real training just a bike ride or a run here and there. I have to admit that I enjoyed the time off but enough is enough. I went for a 2 hour casual paced mountain bike ride last week and it near killed me. I was sore the next day and took a couple days to recover. I've been riding a few times after that debacle last week and feeling a little better about my relationship with my bike. Today was a 35 minute trail run and I am optimistic that I will not be sore come tomorrow morning as I have a short mountain bike ride scheduled after work. Let the 2012 season begin!
As in years past, I am checking several websites in order to nail down the races I will participate in this upcoming season. Xterra hasn't finalized the 2012 season yet, but it does have a few races posted that I am interested in racing. About a month ago I started fantasizing about big races in exotic locales. First up was XTERRA Guam. I've always wanted to go to Guam after hearing my Dad talk about his trips there while in the Air Force. However, the Guam race was to early in the year and I didn't think I could save enough money to get there. So then I looked at XTERRA New Zealand. It was do-able being a month later than Guam. I really started looking into the logistics. Then I came back to reasonable thinking. There are many race I would like to do here in the states before I start racing on other Continents. Moreover, my ultimate goal is to get back to Ogden and race well, my extra resources should be funnelled to achieving that goal. Next year Guam is on my list.
So far this is what my schedule looks like. I included some races that I don't have a date for yet but included them in order according to last year.
03/11/12 Du it in the Dirt Off-road Duathlon Hot Springs, AR
04/??/12 South Central Champs Waco, TX
05/06/12 XTERRA Gator Terra Ruston, LA
05/20/12 South East Champs Birmingham, AL
06/??/12 XTERRA Eureka Springs AR
06/24/12 XTERRA Dog Days Arkadelphia, AR
After this the schedule gets a bit hazy. As for the 2012 XTERRA races in Arkansas, there are no more. I'm eyeballing a couple races in TX to complete my XTERRA schedule but at this point I am undecided on which or how many I want to do.
I am excited about the two Championship races on my schedule for a couple reasons. First being a bit longer course, much like the one that kicked my ass in Utah. Second being much faster competition.
I've got my training schedule planned out through January, now it's time to do work.
Posted by igotem ____________ Kevin Cox at 2:52 PM No comments: