First running of the Syllamo 24 hour. I've done a 7 hour ride on the Syllamo trail system and I have to say it was one of the toughest rides I have ever done. I can't imagine a full day of racing there. Anyway, here is a link
Posted by igotem ____________ Kevin Cox at 7:41 PM No comments: 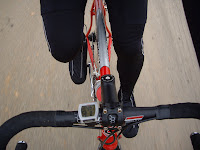 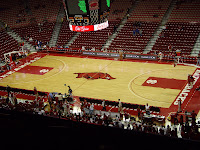 Had a busy weekend with plenty of riding, parents in town, eating out, a Razorbacks game, studying, a long hike/bushwack, a little shopping, and finally tonight--a few adult beverages while watching the ToC. To say the least, it has been a great weekend.

The Razorback game was kind of a bust. We ended up losing by 16 points or so, and it was never even really close. I don't know what has happened to my beloved Hogs. Started the season 12-1 with victories over top ten ranked Oklahoma and Texas, now we sit last place in the SEC at 13-10. What gives?

Enough of that, on to training. Managed to get in just over 10 hours on the bike despite my sickness. Running and swimming were almost non-existent, logged in one workout in each discipline. Sickness is about 95% gone and fitness will return shortly. 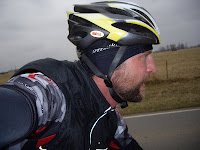 Got out on the road bike today for a 2.5 hr ride. I really had to psyche me self up to get out and ride today. When I left my house the temp was 34 degrees with snow flurries. That is a big contrast to my short sleeves and shorts I was sporting on my ride Friday evening. I'm grateful for those warm days in Jan. and Feb, but damn it makes it hard to find motivation when it is snowing less than 24 hours later. I guess you just have to man-up and suffer through the nasty workouts because I just refuse to buy a trainer. The only reason I could warrant a trainer is if the snow and ice made 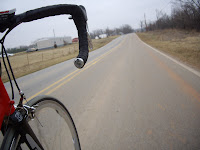 the roads unrideable for days in a row. That just doesn't happen here, so I guess I get to suffer outside during the winter and bitch about it here on this blog.

It's the Little Things in Life 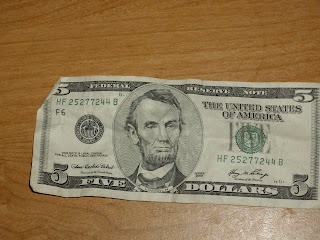 At the end of my ride this evening, while stopped in traffic at a red light I found this. Score! I just happened to look down to my right and there it was half burried under some leaves and debris. I got all excited and half expected it to be fake or as I went to pick the bill up, some jackass yanks it away via a string. I never have found anything of value during a ride much less actual money.

It's been a good week, I am finally getting over my sickness and feeling like my normal self. I've logged in over 9hrs on the bike so far this week as well as a couple of short runs. Parents are here this weekend so that will probably cut down on training opportunities. Planning on a trail run tomorrow morning early and hopefully a little spin on the bike after the Arkansas/Kentucky b-ball game, we have tickets, sweet! Then on Sunday I plan to sneak out for a few hours of road bike fun.
Posted by igotem ____________ Kevin Cox at 4:45 PM No comments:

When Work Gets in the Way...

Not much you can do about it. My boss just told me about a free RCIS training weekend up in Kansas City. These events are usually in the neighborhood of $300+, so I'd be a fool not to partake in such generosity. The bad news is that it is the same weekend as the Spa City Du, an event I really wanted to make. My job is important to me and attending this class is important to my advancement at work, I guess I have to be all grown up and forgo the race.

The temps have been great the last few days, setting almost record highs. I went for a road ride yesterday and got shelled because of strong South winds on my way home. I guess I just can't learn, into the wind to begin and at your back to return. Oh well, I survived. Today was a short run with my dog(Smuckers). I was showing off my pasty, white legs as the temps were in the upper 50's. With temps remaining high for the rest of the week, I have a great week of training planned.
Posted by igotem ____________ Kevin Cox at 5:05 PM No comments:

Sickly and a new Ride

I was feeling ill all week, most likely brought on by no heat and sleeping in strange places the week before. Feeling better today, Amoxocillin on board.

I sold my mountain bike today and promptly picked up a Cannondale R900. Will be strictly on road rides for the next month as I gather parts for my new mountain bike build.

Gonna get out and do some training tomorrow, finally. 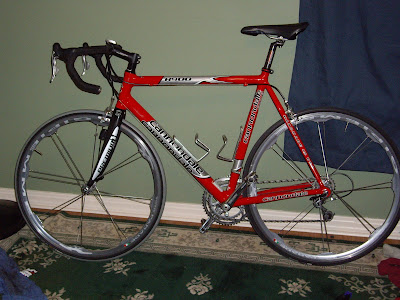 Really sucks. Power went out Tuesday about 3p and finally came back on today at noon. I'm tired of sleeping at friends house, a night here a night there, it got really old. Thankfully I will be in my bed tonight with heat.

No training news to report, although I did manage two days of commuting, a 45 minute run and a weight training session this week. I am shelled right now, 12 hours of chainsaw work in the last two days plus stacking all the cut wood has me feeling puny and sore tonight. The sad thing is that the yard work is still not done. Also, after the yard is cleaned up, the trails are going to need a lot of attention before they are rideable. Ice storms are a real drag.

Here are a few pics of the carnage: 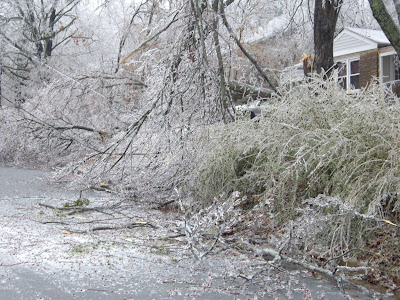 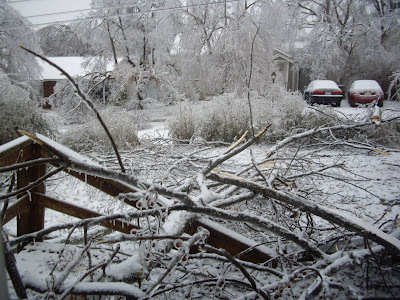 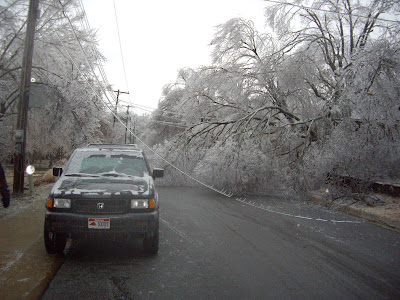 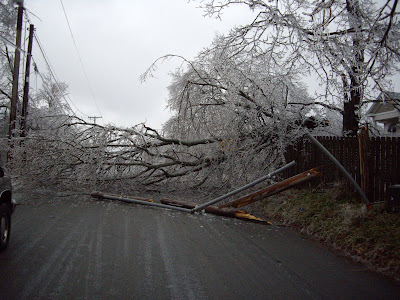 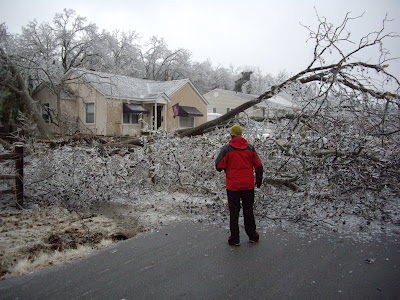