I Learn Something New Everyday

I took my busted derailleur into the shop today to get some insight on why this expensive piece of equipment broke. Jonathon, one of the full time mechanics, had a quick look at it and told me that this failure was a good thing. Turns out that the screw/bolt is replaceable, I had to take off a snap ring and the damaged part slid right out. I was lucky to find a replacement part at work for no charge. Working at a bike shop definitely has some privileges, not only do I get a price break on parts but also a lot of general bike knowledge is being bestowed upon me. I swear I learn something new everyday I work in that shop.
Just starting a new block of training to get ready for the Xterra in Jonesboro. Next couple of weeks will be spent on the road bike logging some longer rides. I still have a couple runs planned per week as well as 3 weight training sessions a week. After these two weeks I will start bike/run workouts with a focus on intensity. I'm excited and looking forward to the next 6 weeks.
Posted by igotem ____________ Kevin Cox at 6:24 PM No comments:

That's Not Supposed To Happen...

All of this could have been avoided, but I wanted to sleep in this morning. It will end up costing me at least 70 bucks. Here's the story. My friends were getting together for a road ride this morning and in order to beat the heat, they were leaving from the bike shop at 830a. That is not early by any means but it meant that I would have to get up at my normal 6a wake up time. You see, Sunday is the only day of the week that I don't work, hence my only opportunity to catch some extra Z's. I relish my Sunday morning sleep in, I look forward to it. I got my friends text about the start time for the ride as my sister and I were getting ready to head down to Dickson st. for a couple of beers. After a couple of beers, I knew sleeping in Sunday morning was in order.
I woke up this morning to absolutely gorgeous weather at 830a. I knew my friends were going to have a killer ride given the down right nasty heat we have been expierencing lately. I was happy for them but I knew I had made the right descion for me. I got the dog out for a walk, a long one of about an hour. She was happy. Next up for the day was a movie, War Eagle. This movie was shot in NWA and I recognized several locations in the film, it was good. I recomend this film, go see it.
Now comes the ride. I decided to head out to Hobb's for a mountain bike ride. My plan was to put in three 9.5 mile loops at 80-90% race pace. Like I mentioned earlier the weather was brilliant. mid 80's and very low humidity. My first lap was great, lots of bikers out. I thought some guy was going to catch and pass me, but I lost him at the first climb and never saw him again. Pulled the first lap at 51 min. I stopped for about a minute for a gel and then it was off for the second lap. I was feeling great, the cool temps had me feeling extra strong. Then it happened. About a mile to finish the second lap, I felt something get sucked up by my back tire. I heard a slight rub so I stopped pedaling and was slowing to a stop. I guess I didn't come to a stop soon enough as I heard a very distinct snap. I slammed on the brakes, came to a stop, only to find my derailuer helplessly dangling off the hanger. What? The hanger is fine, the derailuer is not. That is not supposed to happen, right? The bolt coming from the d. was snapped, half was still in the hanger, the other half on the d. I thought the hanger was designed to break first, as a hanger is a lot less expensive to replace. Anyway, if I had just gone on the road ride, I would have saved some money. I made it to the road after about a half mile hike, I did the one legged scooter push/coast back to the car for the final mile. I was lucky the incident happened so close to the end of the trail, the silver lining I guess.
Posted by igotem ____________ Kevin Cox at 7:22 PM No comments:

I have a couple stellar road rides coming up next week, Thursday and Sunday around the Fourth of July weekend.

Here are the routes...

I had some health issues(I won't get into detail) that kept me out of the last two Xterra races. Long story short, health issues-ER visit-discharged 5 hours later-stress test-cleared for workouts. That's where I stand. I lined out a work-out plan that will build up to a Xterra race in Jonesboro, AR. I'm excited and ready to put in some serious hours training

I did pick up a new road bike, an Allez sport. This is my second Allez, I love this bike. I know there is nothing special about an Allez, I don't require a uber-fancy road bike. Riding road is just training for me, all I need is a comfortable bike that handles the road well. The Allez does it for me. 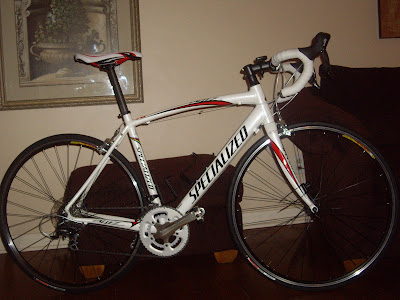 My first real race of the season is tomorrow. I took today off from work, just chilling at the house, cleaning my bike, and watching a movie or two is all I have on tap for today. A huge thunderstorm rolled through about two hours ago, the course is going to be wet and slick. I really don't even know why I bothered cleaning my bike as it will be trashed shortly into the bike course. I've got nothing else race report tomorrow.
Posted by igotem ____________ Kevin Cox at 1:05 PM 1 comment:

Ok, so the trail was finally dried out after a solid week of no rain, sun, and temps in the mid 70's. I was stoked to ride the course with dry conditions after last Sunday's cluster. I saw a women heading up from the lake before my ride all decked out in fancy swim attire and I made sure to pick her brain on the course before I headed out. She told me the course was in ok shape and that all the climbs were do-able. She was right, I made all the technical climbs however I just wasn't feeling all that great, not really strong at all. I bagged the ride after just one lap, put in a respectful 1hr 29 min time. That's definetely not as fast as I'd like to go but like I said earlier I just wasn't feeling really strong.
Big decision coming up for this weekend, pre-ride again on Sunday or race Hobb's. Hmmm. Don't know yet what I'll do. I'd really like to get in another ride and run on the course, but it is kind of hard to pass up a race in your backyard on an awesome trail.
On another note, I found a good deal on a pair of Zoot shoes, I've always wanted to try these shoes. I'm not sure how they will perform on the trail, I'll find out in a couple days.
Here are a couple pics from Leatherwood. This one is close to where the swim will start 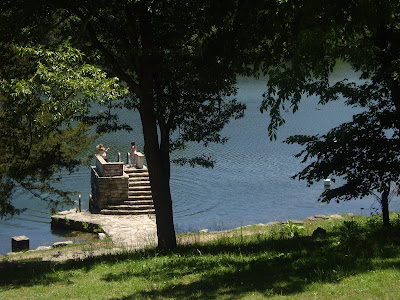 Here's me crossing the dam 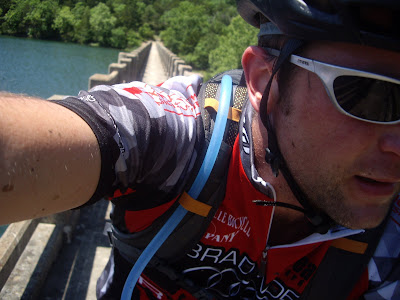