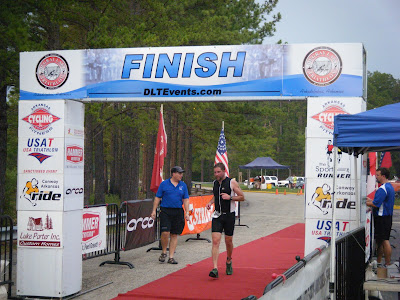 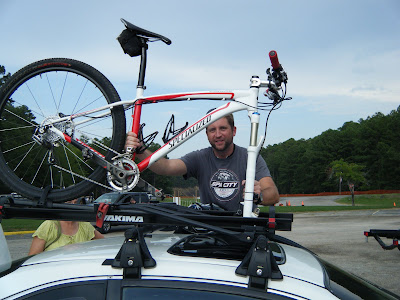 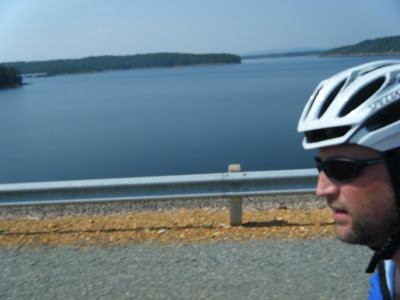 This past weekend was the inaugural Lake Degray XTERRA and my birthday. This was the rescheduled race from early spring, moved due to massive flooding. As a bonus, my parents were able to make the trip for the weekend. A race on my birthday with my parents, it was a good weekend.

I arrived at the race venue on Friday afternoon and was greeted with 100+ temps and downright nasty humidity. I had planned just a quick 45 minute ride on the bike course and then a short t-run. The bike course started with a 1.75 section of paved road over the spillway/dam, this offered some great views of the lake. 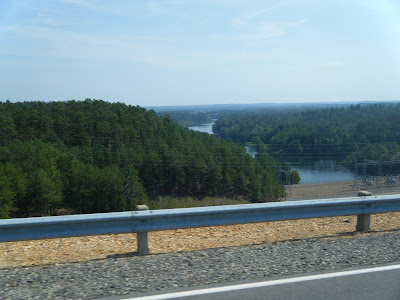 This was the first time I had ever ridden this trail and I didn't quite know what to expect. The first mile and a half left a bad taste in my mouth, it was wide enough for a truck. That section didn't last long as after the trail crossed the paved road the real singletrack began. I really liked the trail, it was fast and flowing. I finished up the 45 minute ride and headed back to my vehicle. Being as hot as it was, I decided to bag the run and jump into the lake for a quick swim.

The possibility of racing in 104 degree temps had me a bit worried. The race start time was 5pm, terrible time to start a race in my opinion. However, we caught a huge break about 3:30 in the afternoon when the clouds rolled in cooling the temp to a manageable 90. There were actually some showers in the vicinity. During my swim I caught sight of a rainbow off in the distance.

My race went pretty smooth, I ended up 5th in my age group 20th overall. I had a great swim as I was 8th out of the water. I went out on the bike maybe a bit to conservatively, my rationale was to save a bit in the tank for the run. I did finish strong and I'm somewhat pleased with my effort.

Next up, I hope is an invitation to Nationals in Utah Sept 24.